In concert with the horrific Earthquake and Tsunami that devastated much of northeastern Japan, eleven nuclear power plants automatically shut down. All reactors automatically shut down when severe events occur, and the shutdown happens beyond human interaction. One such shutdown happens when earth movement caused by an earthquake reaches or exceeds a predetermined level. The 9.0 earthquake centered off-shore of northern Japan caused the excessive ground movement that triggered the eleven automatic shutdowns.

The tsunami inundated the six reactor units at Fukushima and severed all electrical feeds to the Fukushima nuclear complex, which houses six power plants varying from ~500 megawatts (No. 1) to 1100 megawatts (No. 6). Emergency electrical generators automatically started at all of the plants, but nearly all seem to have been damaged by the powerful tsunami. This left Fukushima units 1-4 without emergency power, with the exception of some battery power which is limited in how long it will last.

Over the several hours following the quake and tsunami, pressures inside the reactor containment area climbing dramatically. News media reports suggest the operators are relieving this pressure to the outer floors of the reactor building. 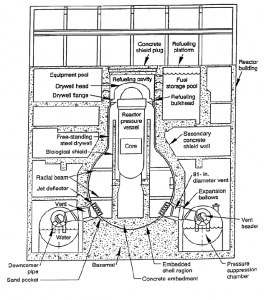 Eventually, the radioactive gasses, combined with what has been reported to be hydrogen, filled the area outside the many-feet thick, steel-lined secondary concrete shield wall. In the middle of the day on March 12, the area above the concrete containment area, which seems to house the spent fuel pool and it’s fuel-handling equipment, exploded. It has been reported that the walls were made of concrete and steel, but were quite thin relative to the massive containment walls around the reactor, located below. The currently sketchy level of news media reporting indicates that there has been little or no damage to the reactor containment structure itself.

There has been a precautionary evacuation of all people out to 12 miles (20 kilometers) from the plant. Such actions are taken according to emergency plans designed to keep people safe when there is sufficient potential for the release of hazardous levels of radioactive material. The operative term here is “potential”. These legally-binding emergency plans were created during the few years following the Three Mile Island accident, before the reality of radiation hormesis was understood. (see “Radiation : The No Safe Level Myth”) Thus, such public evacuation “tipping points” occur in the plans at levels about a hundred times less than would actually need to be the case if governments would use radiation hormesis curves for their emergency plans. The apocalyptic “what if” speculations being proffered continually by all western news services are making the psychological damage from the Hiroshima Syndrome worse.

Speculations referring to the 1986 Chernobyl accidents are empty…vacuous…completely ridiculous. A Chernobyl-type accident at a water-moderated reactor is impossible. (See “The Chernobyl Disaster”) The speculations referring to Three Mile Island have considerably more merit. (See “Three Mile Island and the China Syndrome”) Please keep in mind, TMI produced no long term health effects in the exposed population, and no environmental damage whatsoever. Whether or not this will also be the case with Fukushima remains to be seen.

Nearly all of the most recent news reports (typical examples listed below) have so many technical mistakes, exaggerations, confabulations, and statements of frightening rhetorical nonsense, that time does not allow this writer to adequately address them. These gross errors ought to be addressed when the dust has settled and we all really know what exactly happened.

All of the Japanese government’s and Japanese electric utility’s orders for people living between 3 and 20 kilometers from Fukushima to stay indoors and seal their homes, is precautionary. The American government’s suggestion to have American citizens evacuate Japan is ridiculous, by real world evidence, and therefore is an ethically unconscionable act. Both of these actions are based entirely on the no-safe-level myth, amplified by the desire to cater to the public’s phobic fears concerning radiation exposure as a result of the Hiroshima Syndrome. These actions promise the most votes and politically drive government actions. Votes depend on catering to widespread public beliefs. By using the scientifically correct hormesis model for radiation exposure and possible health effects thereof, few of these official orders would be warranted…and the Americans in Japan would not be un-necessarily bothered.