Before today’s relatively brief list of updates, there seems to be some confusing information on both the Japanese Atomic Industrial Forum (JAIF) and International Atomic Energy Association (IAEA) charts for the status of the three Fukushima Daiichi Units that remain in an emergency condition. Specifically, the water levels in each reactor pressure vessel. Both the JAIF and IAEA charts say that all three reactor fuel cores are currently partially uncovered (present tense phrasing), and the charts have been displaying this for more than two weeks! Paradoxically, scrolling down from the JAIF chart on page 2, to page 5 (of 6), we find that all three reactors have water levels listed. This becomes very curious at best. Here’s why. 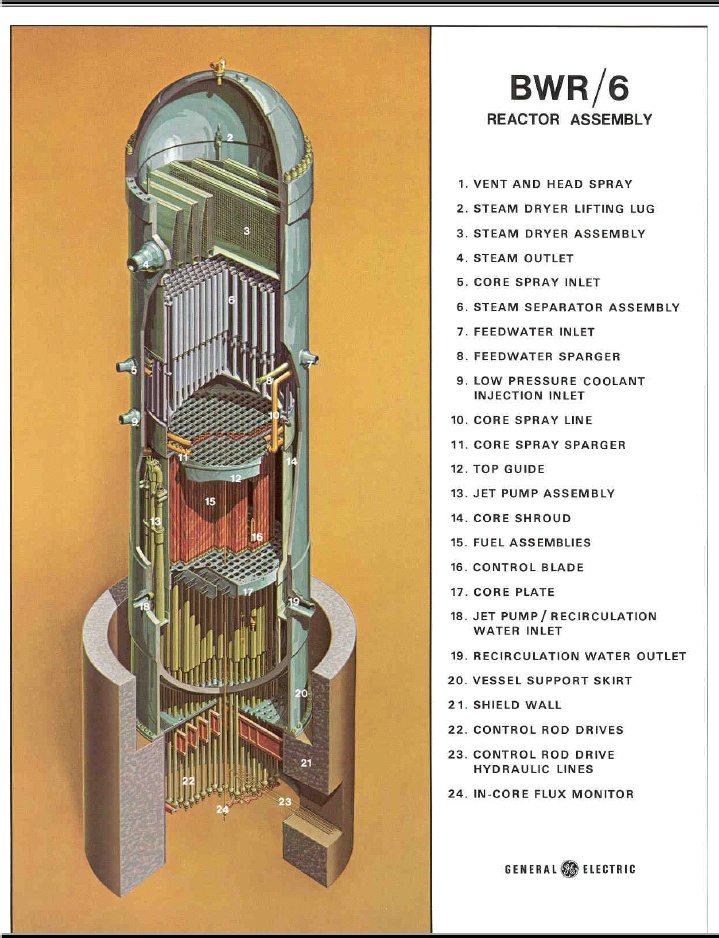 There are no water level detection devices that monitor the fuel core itself. This is because during routine operation, the water in the reactor core boils at a terrific rate. Thus there is always a roiling mixture of water and steam in the fuel core. Yes… the fuel cells are built to operate in a steam environment. They are necessarily much, much tougher to damage than the Pressurized Water Reactor fuel cores (like TMI) which have no boiling in the core. In the BWR, if a full automatic shutdown (SCRAM) happens, the control rods are literally rammed into the core, stopping the chain reaction in less than a second. This immediately stops the majority of the boiling, and the level of the steam and water mixture drops, suddenly and rather dramatically, because most of the steam bubbles collapse. By keeping the range of operating water level way up above the core, the fuel core below never gets uncovered, even if the rector experiences SCRAM from 100% power. Thus, the water level detectors only measure water levels beginning many feet above the top of the fuel in the core! Any water level shown on the water level monitors means the core is completely covered and there’s lot’s of water on top of that. Many feet of water, in fact. JAIF’s data page (5 of 6) displays detected water levels in all three reactors, and because of the well-above-the-core location of the detectors, there’s at least 15 feet of water indicated to be on top of each fuel core!

The cores cannot be partially uncovered on charts and then shown to be totally immersed using the data the charts are supposed to be based on. This is a terrible contradiction.

And, in a hot reactor condition driven by decay heat, like we had at Fukushima for at least 5 days before fire truck pumps were available to supplement the steam-driven feedwater pumps, there was unquestionably steam engulfing the fuel cells sticking out above the water levels during partial uncoverage periods between feedwater injections. In other words, the hot, uncovered fuel cells in the reactor cores were probably never really dry! All the water inside the reactor pressure vessel must be boiled off before the steam temperature can increase to temperatures capable of causing severe fuel damage like TMI (severe meltdown – NRC, 2009). We don’t know if a complete loss of water level was ever the case in any of the three Fukushima cores of concern. And, we won’t know until the pressure vessels are opened and visually inspected.

Further, no licensed reactor operator in the world would intentionally leave the fuel cores of three at-risk reactors partially uncovered for two weeks. As soon as the ability to pump enough water into the reactor to keep the core covered is available, the operator will keep the core covered, with many feet of water level above the core to provide an appropriate margin of safety. No reactor operator in the world would neglect doing this. For JAIF and IAEA, posting status reports that say the fuel cells are, and have been partially uncovered for two weeks, is an insult to reactor operators everywhere! I have refrained from mentioning this out of respect for JAIF and IAEA, but the resolution of the the posted water level contradiction is way over-due.