There have been but a few new developments since yesterday in the technological and radiological conditions relative to Fukushima. However, the Hiroshima Syndrome effect has amplified considerably. First, we go to Fukushima…

Which leads us to…

CNN reports Massachusetts Representative Ed Markey has gone public with his intent to allegedly improve the safety of all American nuclear power plants through proposed legislation spawned by the Fukushima emergency. This is a prime example of irresponsible political opportunism, on all accounts. American nuclear plants are already safe enough…in fact way, way over-built with regard to safety because the safety regulations are all based on the fictitious no-safe-level-of-radiation notion. Further, looking at the before-quake and after-tsunami pics of Fukushima, prior to the first hydrogen explosion, we find all of the buildings were undamaged and intact. (Below, the picture at the left is before the quake, the second a few minutes after the quake, and the third several hours later after the tsunami waters receded.) 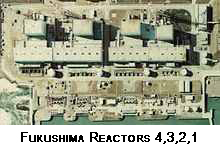 It was the loss of emergency electrical supplies that caused the emergency at Fukushima, and not a loss of any of the physical structures. All physical safety considerations were unquestionably more than adequate for an earthquake 12 times more powerful than the “design criteria” and a tsunamic surge at least 15 feet higher than the criteria. Like all nuclear plants, Fukushima was severely over-built…and survived relatively unscathed, except for the emergency power loss. Emergency power loss mitigation should be the only issue of improvement. The NISA proposals (above) will surely reduce the likelihood of future CLOP situations to nearly-zero! America should take serious note of this, because our legislative methodology relative to nuclear safety promises a long, laborious time frame before anything will be done, whether reasonable and unreasonable in nature. Every political opportunist like Markey will want to add their two cents with “further safety improvements” as well, and stretch out the course of events over a ridiculous and needless amount of time. Markey knows this, so he is also proposing a moratorium on new nuclear plant construction until the politicized safety modifications are in place and legally mandated. Did I mention that Markey has been one of the staunchest nuclear opponents in Congress since he was first elected? If we can use the political after-shocks following Three Mile Island as an example, the moratorium on new nuclear construction will last years! All the while, the fossil fueled power plants the new nukes should have replaced will puke out trillions of tonnes of greenhouse gasses, and produce billions of tonnes of radioactive fly ash. But, anti-nuclear political opportunists don’t think this way. They have a “let’s make political hay while the nuclear sun shines” agenda.

Oh yes…almost forgot…reactor pressures and temperatures continue to drop in Unit 1, 2 & 3 reactors, cooling water flows to the reactors continue, as do the periodic replenishments of the four spent fuel pools….as the decay heat levels continue to inch lower and lower.