Today’s belated update includes considerable input from an E-mailer, “Ronald G.”, who has made today’s informational search much, much less time consuming. So Ronald gets my personal “Atta-boy”.

Currently, Units 5 & 6 at Fukushima have had their electrical systems re-energized, and both reactors have been put in a “cold shutdown” condition. Cold shutdown is the condition a reactor is in when it is not operating and safe. This strongly suggests that concerns about electrical equipment not operating after electricity was restored, were false fears for Units 5 & 6. Technically, the crisis has ended at Fukushima Units 5 & 6. In comparison, Three Mile Island was in a cold shutdown condition by the end of the first day of its accident. If we use the TMI experience as a predictive tool, the media will continue to broadcast official-sounding concerns relative to Units 5 & 6 for perhaps another week to 10 days.

Work continues in the effort to re-energize the electrical systems in the other 4 units at Fukushima. From the TEPCO press releases, it is said that they will energize Unit No. 2 first. Here, I must make a confession…I said that Unit 2 would be energized first because it was of most concern. I was wrong. A very clear picture of the reason why Unit No. 2 is the one being picked to energize first comes from an Associated Press article… 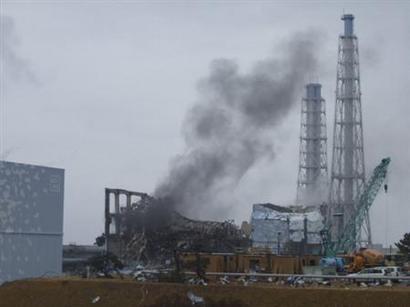 Smoke is seen coming from the area of the No. 3 reactor of the Fukushima Daiichi nuclear power plant in Tomioka, Fukushima Prefecture in northeastern Japan, March 21, 2011. REUTERS/Tokyo Electric Power Co.

Unit No. 2’s main building is shown at the extreme left. As one can see, it has not experienced the type of hydrogen explosion which has devastated the outer walls and roofs of Units 1, 3 & 4. In fact, it seems there has been no explosion damage at all! I have re-checked TEPCO news releases, and many of my other reliable sources of information, and can find no mention of an explosion in Unit 2. This means the equipment inside the building, including the electrical switchgear in the “temporary power panel” (TEPCO quote), should be undamaged. This panel is where the emergency power cable is to be connected. What better place to start the re-powering sequence for Fukushima’s damaged units than the one with little or no damage? One caution has been mentioned in the info supplied by Ronald G, out of the Nuclear and Industrial Safety Agency. Before pumps and valves in Unit 2 are actually powered up, the emergency workers must be certain there is no hydrogen in the building’s internal atmosphere. Hydrogen can spontaneously explode at 8% concentration, if mixed with oxygen. But, it can also explode at a much lower concentration in the presence of an electrical spark. Starting electrical equipment causes at least a tiny bit of sparking. Thus, the hydrogen gas levels must be proved to be well-below any concentration a spark might detonate.

One other most interesting fact we can glean from the above AP photo…look at the rubble on top of and around Unit No. 3, in the center of the pic. Now, look at Unit No. 2, on the left. The ridge going across the middle of Unit 2’s outer wall marks the floor of the upper refueling deck. The building’s inner steel-reinforced concrete containment structure (a building within a building, per se) descends below the ridge, and many tens of feet underground. Now, look at the level of upper rubble on Unit 3 and compare that to the ridge on the outer wall of Unit 2. The Unit 3 rubble is clearly on top of the inner containment structure. This strongly implies the correctness of previous reports of no loss of containment integrity having occurred at any of the three Fukushima Units that experienced hydrogen explosions. Like I’ve reported here for more than a week…it’s very, very tough to break a structure made of steel-reinforced concrete several feet thick.

The smoke in the picture…TEPCO reports it is coming from smoldering electrical wiring and other flammable materials. Certainly not the reactor itself. TEPCO news releases might be thin in the amount of timely information they contain, but what is in there has continued to be proven correct. In addition, news media stories of the smoke coming from the reactor itself are logically groundless…there’s nothing inside the reactor or inside the containment around the reactor that is flammable.

Last night and this morning, several American officials have continued to try and “prove” early speculations by American “experts” of one spent fuel pool being empty and others showing spent fuel cells sticking out of the water. I witnessed one such report on “60 Minutes”, last night. They used very nice looking graphics to “prove” it. They also show pictures above the damage of one of the Fukushima Units (it looked like No. 3) to emphasize that there are no images to prove Japanese claims of the pools having never been compromised. Well, the same pics don’t prove the American official’s speculations either. No proof there, of any kind. This is beginning to seem like a last ditch effort to maintain credibility for the Nuclear Regulatory Commission chairman who made the wild speculation in the first place. Being wrong could be embarrassing, as well as career-threatening. Plus, what would his being wrong imply about the NRC, in general. Once again…unfounded speculation by high ranking-officials should be avoided like the plague.

There have also been other news stories about some industrial inspection reports made before March 11 about possible safety concerns at Fukushima. This makes the strong, implied suggestion that the Fukushima plants were unsafe to begin with. Poppycock! The situation at Fukushima was caused by, and is entirely the result of the worst tsunami ever recorded in human history. That’s it. Period. Hindsight is correct if and only if our “hindsight eyes” are 20-20. The suggestions that Fukushima plants were already unsafe before the tsunami are made by those who need “hindsight glasses”.

The news report that the workers are fleeing the plant complex again, is as misleading as the similar one a few days ago. To reiterate, standard health physics practices include not radiologically exposing off-duty workers. As you double your distance between yourself and the source of exposure, the radiation level drops by a factor of four. This is the inverse-square phenomena, a natural law for any radiation including light. (Thank you Mother Nature) There is no doubt that the off-duty emergency workers are leaving the site until their next scheduled shift so as to not un-necssessarily be exposed. Standard Health Physics procedure.

In addition,TEPCO reports that they have been pumping seawater into the hot (due to decay heat) reactors, off and on since March 12. Without electricity, how has this been able to happen? The pumps that normally feed water into the reactors (the feedwater pumps) are all steam-driven. The steam comes from the reactor. When enough steam pressure has built up in the reactor to run the pump, the pump is started. Since the decay heat level after the first day of shutdown is about 0.4 %, and exponentially diminishes thereafter to about 0.1% after 2 weeks, there isn’t enough steam to run the feedwater pumps for very long. Thus the pumping must necessarily be an off-and-on experience. Each day that has passed has allowed less and less “on” periods, and longer “off” periods because decay heat production has naturally dropped. It is quite possible that this sporadic pumping scenario has caused repeated covering and uncovering of the hot fuel with water.

There is little doubt that the reactor fuel cells in Units 1, 2 & 3 have been damaged. The hydrogen productions make this quite probable. It gives strong proof of Zirconium cladding heat degradation, but (to be precise) no one knows if the damage has resulted in nuclear fuel (Uranium) melting. Possible? Yes. Actual? Hard to say.

One final note, per “Ronald G.”…one of the most excellent websites I have seen for most technical and radiation-related information about Fukushima is the Massachusetts Institute of Technology website. (URL below) Good job, Ronald!