As of this writing, all three of the Fukushima units at Daii-chi are reported to have experienced fuel-damage accidents. Reportedly, the fuel in Unit No. 2 was briefly uncovered at some point yesterday, meaning the water level inside the reactor had dropped below the top of the fuel cell, greatly reducing the ability of the remaining water to lower the temperature of the fuel caused by “decay heat”. The most recent report says the water level dropped to below the entire fuel cell for a brief period of time. The operators quickly began pumping sea water into the reactor and “re-covered” the fuel; i.e. re-immersed it with water. Because of the more than two days of natural decay heat reductions, the fuel was probably not uncovered long enough for a full meltdown, but damage to the fuel cell is probable. We want to see the control room records before making a judgment as to the degree of damage.

At this point, it is important to explain what “decay heat” is and why, after three days, the level of heat generation is low enough to give the operators more time than unit #1 operators to remove the heat before melting in the fuel cell occurs. This is actually the most important aspect of day 3 at Fukushima, and it’s critical importance to everyone’s understanding as to what is happening cannot be overstated.

Decay heat is the heat generated by the fission by-products in the fuel after the reactor has shut down, with control rods fully inserted to stop the fission chain reaction. When Uranium fissions it splits into two pieces, called fission by-products or fission fragments. These are two new atoms which are no longer Uranium, and can be any of more than 40 different elements. These new atoms are highly unstable as soon as they form, and are intensely radioactive. The various types of radiation released (Beta, Alpha, and Gamma) are almost immediately absorbed by the reactor fuel and cladding materials, which generates what we call decay heat…heat caused by radioactive decay. Immediately upon reactor shutdown, decay heat can be as much as 7% of reactor power. For Fukushima unit #1, this would have been ~100 megawatts. This is a huge amount of heat. However, as the initial post-shutdown avalanche of radioactive decay occurs, the total amount of heat-generating radiation diminishes very, very quickly. The rate of heat reduction falls off exponentially. One hour after shutdown, the decay heat level is no more than 1.5% (~21 megawatts at Fukushima #1). One day after shutdown, the decay heat level is about 0.7% (~10 megawatts). 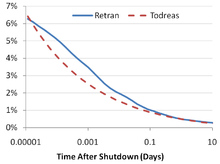 Three days after shutdown (where we are now), decay heat being generated in each reactor is less than 0.5% (~7.5 megawatts).

Here’s the good news. As the rate of decay heat being generated decreases, the amount of time the operators have to take effective emergency action increases…and the time factor increases exponentially. On day 1 of the accident, Fukushima Unit No. 1 was generating enough decay heat to force plant operators to literally scramble for some way to get water into the system. The water level in the reactor was dropping, resulting in probable “uncoverage” of the fuel cell. Without water to take away the decay heat, fuel damage due to overheating would have occurred relatively rapidly about 12 hours after automatic shutdown (SCRAM). Complete uncovering of the fuel for a few minutes during day 1 would begin fuel damage. A few more minutes of “uncoverage” could cause some of the fuel to melt. In what more and more seems to be a brilliant decision, sea water was pumped into the reactor to insure that the fuel was no longer uncovered with water. The extent of fuel damage to Unit No. 1’s reactor cannot be estimated, at this point, which unfortunately leaves the issue open to terrifying media-inspired speculation. The fictional apocalyptic meltdown scenarios currently being broadcast around the world cannot happen in the real world, of course. However, it seems safe to assume that some severe fuel damage did occur in Fukushima 1, ultimately leading to the atmospheric release of radioactive fission by-products including Cesium and Iodine.

The decay heat generation level during day 2 at Fukushima Unit No. 3 dropped to about 0.5%. In the hope that sufficient emergency power might be restored, the operators used whatever they could to keep the core covered and remove the now-slowly diminishing decay heat. They wanted to save the reactor core. Their prayers were not answered. Eventually, their core was at least partially uncovered and damaged before they reluctantly decided to pump in sea water. Yes, their plant experienced a hydrogen explosion in the building’s upper refueling area, but the massive multi-layered containment building surrounding the reactor below the refueling does not seem compromised. At this point, Fukushima Unit No. 3 is being sufficiently cooled and in a relatively safe condition.

Fukushima Unit No. 2 seems to have maintained reactor cooling longer than units #1 and 3. Thus, the operators held out hope that the local electrical system could be recovered soon enough for them to keep fuel damage from happening. Like yesterday at Unit No. 3, these prayers were not answered. The hydrogen explosion from Unit No. 3 damaged the mobile emergency power generation equipment for Unit No. 2 to the point where it was lost. Rather than wait for the fuel cell to be uncovered long enough for fuel damage to produce an explosive concentration of hydrogen in the upper refueling area, the operators decided to begin their sea water cooling immediately.

It will be several weeks before the decay heat generation levels at all three units will naturally diminish to the point where it will no longer be possible to melt the fuel in the reactors, and a much longer before less severe fuel damage will no longer be possible. Any further fuel damage depends on the fuel cells somehow becoming no longer covered by sea water, which is now an unlikely scenario. One thing is for sure…with every moment that passes, the decay heat being generated in all three Fukushima fuel cells is dropping and the risk of continued meltdown drops with it.