Fukushima Groundwater Contamination is Not an Actual Emergency

This past Monday, a Nuclear Regulatory Authority inspector at F. Daiichi told the Press that the contaminated groundwater problem places the station in a “state of emergency”. The official, Shinji Kinjo, admitted his personal opinion was based on a “rather high possibility” that contaminated groundwater is leaching into the barricaded inner port (quay) at F. Daiichi, and his estimate was not based on NRA calculations! Regardless, his “state of emergency” declaration is being treated like a serious nuclear crisis at Fukushima. It doesn’t matter that the NRA-itself has not made a formal emergency declaration. It doesn’t matter that there is no evidence of the actual leakage of Cesium and Strontium into the quay. All that matters is Kinjo’s assertion.

The explanation of the situation is complicated. A month ago, some elevated levels of Cesium, Strontium and Tritium (an isotope of Hydrogen) were discovered inside a groundwater testing well. To stop the possible flow into the quay, Tepco drilled a large number of holes deep into the earth and injected a chemical to solidify the ground along the shoreline. This was designed to block groundwater flow to the quay. Over a period of 20 days, the water level in another testing well rose 70 centimeters (approx.. 28 inches). This spawned speculation that the water had risen a bit above the solidified earth below and was flowing into the quay. When Tepco announced the solitary well’s rising water level, the NRA sent a team to F. Daiichi to investigate, headed by Kinjo. Meanwhile, Tepco tested the essentially stagnant water inside two sets of cabling and piping tunnels between the basements of units #2 and #3 and their seawater intake structures, and found quite high Cesium, Strontium and a mix of some 60-other isotopes. The concentrations were similar to the highly radioactive water now in the four damaged unit’s basements. 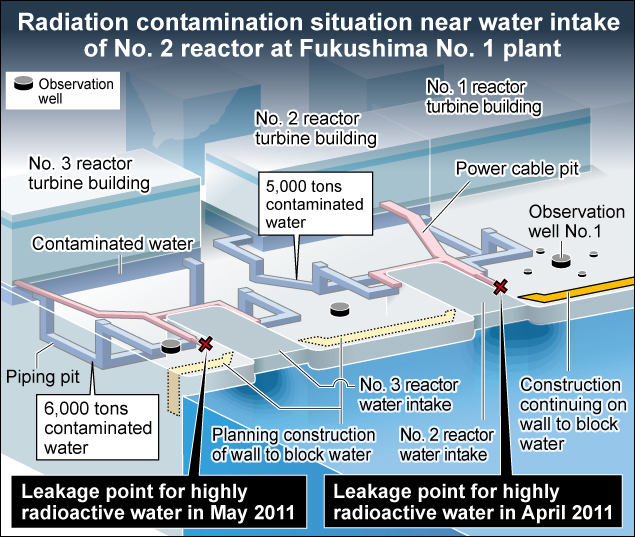 Tepco speculated that some of the waters had seeped through the tunnel’s gravel floors and into the nearby soil, plus some had possibly made it into the quay directly from the tunnels through the water intakes. These worst-case speculations have generated extremely heavy Press coverage inside Japan, and it has gained considerable traction in the international press. But, at this point it’s all based on speculation…swathed in assumption and wrapped in exaggeration. There are a number of reasons why I say this!

To begin, only one of the dozen sampling locations inside the quay has shown an elevated level of radioactivity. Also, it’s just one specific isotope…Tritium…and not Cesium or Strontium or any of the other ~60 isotopes of concern. The rest of the quay’s sampling locations show no discernible. We’ll come back to Tritium-itself later. What’s most important is that that the quay is completely barricaded from the rest of the F. Daiichi station’s seaport.

In the above picture, please note the thin red line snaking across the quay’s opening. This is a “silt dam” that drops all the way to the floor of the quay, intended for opening and closure to admit equipment barges into and out of the inner port. It has not been opened for more than a year. It keeps the inner and outer waters from mixing when closed. Nothing, not even Tritium, has been detected outside the quay. This includes sampling as far as 10 kilometers beyond the outer break-wall of the entire port area (part of this can be seen stretching beyond the quay at the top-left of the picture).

What does this tell us? Contrary to the implications common to all Press reports and NRA statements, the Pacific Ocean is obviously not being polluted! Whether or not the quay-itself is being polluted is a matter of opinion.

Next, let’s look at what is happening with the groundwater that is allegedly flowing into the sea, speculated at 300 tons per day (the NRA’s most recent estimate). Tepco has filtered at least one sample from the contaminated testing well that started everything. After filtering the sample water, the level of Tritium did not change, which should come as no surprise. Tritium is hydrogen and is thus part of the water molecule which passes through any type of filter. But, the activity of Cesium, Strontium and the ~60 other isotopes dropped to pre-emergency levels. This means the Cesium and the other non-Tritium isotopes are most likely being filtered out by the soil the groundwater is flowing through. Quay water tests confirm this. None of the non-Tritium materials are detected in the quay. The only isotope detected in the quay, at but one location near the unit #1 seawater intake structure, is Tritium.

As said before, Tritium is the radioactive isotope of Hydrogen. It is also one of the numerous radioactive isotopes produced by Mother Nature, in this case caused by upper atmospheric collisions between energetic molecules and cosmic rays. Tritium has one proton in its nucleus, like all Hydrogen. But, it also has two neutrons attached to the proton, which is symbolized as H-3. The two neutrons cause the nucleus to be a bit unstable. It may be counter-intuitive to some, but here’s what happens next. One of the neutrons spits out an electron, turns into a proton, and the Tritium instantly becomes Helium, which harmlessly goes its own gaseous way. The electron is called a Beta particle, incorrectly called a “Beta ray” by the Press. Microwave and X-ray are “rays” because they are a continual flow of energy. Betas are sub-atomic particles. Betas are also about the weakest of all the various forms of radiation. The most energetic Beta’s known to man cannot penetrate thin cellophane. Tritium’s Betas are among the weakest of the lot (~6 KeV)…the weakest of the weak, if you will. Tritium’s Betas are relatively ineffectual. That’s why the annual release limits for Tritium sound enormous.

However, the sheer magnitude of the Tritium estimate…in the trillions…sounds like we have something extremely serious going on…something worthy of speculating that an actual “state of emergency” exists at Fukushima Daiichi. Is the Pacific Ocean actually being polluted? It doesn’t seem that it is. Is F. Daiichi actually in a “state of emergency”? It’s a speculative state of emergency, to be sure, but not actual.

* A Becquerel is one radioactive release from the nucleus of an atom every second. The human body contains a constant activity of 5,000 Becquerels due to naturally-occurring Potassium-40 and 4,000 Becquerels from Carbon-14. Each person also contains about 25 Becquerels of natural Tritium activity…just for the record.